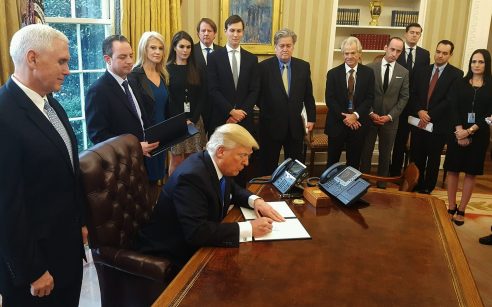 On Monday, President Trump signed a joint resolution eliminating the rule, which had required bidders on federal projects with a value in excess of $500K to report state and federal labor and safety violations within the past three years. The Blacklisting rule, also known as the Fair Pay and Safe Workplaces Executive Order 13673, only went into effect in October 2016.

Whitehouse Press Secretary Sean Spicer called the rule a “job-kill[er]” and said that manufacturers had identified the rule as “one of the most significant threats to growing American businesses and hiring more American workers.”

Construction industry trade associations applauded elimination of the rule. In a press release, Ben Brubeck, Vice President of Regulatory, Labor and State Affairs for the Associated Builders and Contractors, said that “[t]he rule violated the due process rights of contractors by forcing them to report mere allegations of misconduct – which are often frivolous and filed with nefarious intentions by special interests groups – the same as fully adjudicated violations.”

Brubeck’s comments regarding the constitutionality of the rule is in reference to a federal district court’s earlier injunction of the rule.