As we count down the remaining days of 2016 (thank God) it’s time to think about what the new year will bring (I’m good with pretty much anything at this point).

The economists at Dodge Data & Analytics have a few predictions. According to their 2017 Dodge Construction Outlook, they predict that U.S. construction starts will increase modestly in 2017, up 5% to $713 billion, after rather anemic growth in 2016 following several years of steady growth. 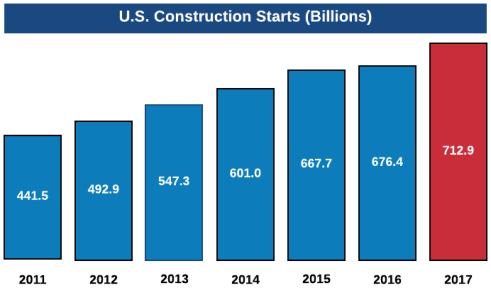 According to Robert Murray, chief economist for Dodge Data & Analytics, while the first half of 2016 lagged behind construction activity in 2015, that shortfall grew smaller as the year progressed, easing concern that the construction industry might be in the early stage of a cyclical decline. Rather, according to Murray, it appears that the construction industry has now entered a more mature phase of expansion, one characterized by slower rates of growth than during the 2012-2015 period and that construction spending can be expected to see moderate gains through 2017 and beyond:

On balance there are a number of positive factors which suggest the construction expansions room to proceed. The U.S. economy in 2017 is anticipated to see moderate job growth, market fundamentals for commercial real estate should remain generally healthy, and more funding support is coming from state and local bond measures. Although the global economy in 2017 will remain sluggish, energy prices appear to have stabilized, interest rate hikes will be gradual and few, and a new U.S. President will have been elected.

Of note, DodgeData & Analytics’ 2017 Dodge Construction Outlook came out before the Presidential elections, when many believed that Hilary Clinton would be shoe in for the Presidency. While there are many uncertainties surrounding how the nation and economy will do under President-elect Donald Trump, Trump has promised to spend $1 trillion on infrastructure in the next 10 years, and the stock market seems to be betting on it.

By industry segment, single family construction spending is expected to increase the most significantly, while multifamily housing which had seen significant gains over the past years is expected to continue its relatively flat trajectory which began last year, and spending on electrical utility and gas plants will continue to fall: