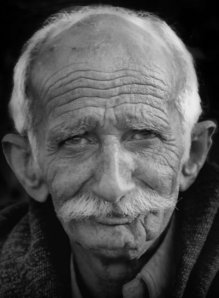 “My grandfather was a magnificent man.

Father of twelve, husband to one. A carpenter, electrician, gardener, plumber, water skier, snow skier, welder … the builder of both of his houses, houses he built with recycled material, not paying a penny over value. . . .

Each time my grandmother told him that she was pregnant, he would go out and learn a new trade: how to operate a boiler, roof a house, frame a room, run plumbing, rebuild cars. . . .

As you can imagine, money was tight for my grandfather. Food was usually bland, clothing was cheap and handed down, and the house was crowded (my youngest uncle often slept in the bathtub or closet). But they never starved, never went in debt, always had shelter, and always paid their bills on time. . . .

My grandfather will never make it into a management book. He won’t appear on a list beside Benjamin Franklin as an efficiency hero. But that doesn’t mean he was any less successful.

He is a patriarch of a large family that I am blessed to be a part of. Every male and female from that family is a hard-working, productive human being. It’s a legacy that goes beyond my grandfather’s seventy years.”

It was a heart-felt tribute to his grandfather. It was also a reminder to be thankful for the simple things in life – For food in your stomach, for shelter over your head and for family around you.

2 Responses to “The Simple Things in Life”